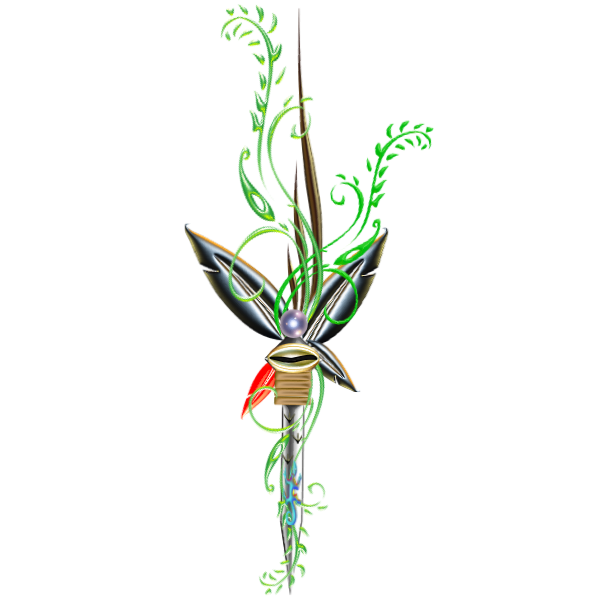 Osain is the orisa of flora and fauna, his ashe is nature, in plants, phases of the moon, and the constellations. his most important role is the continuation of the trees, plants that live on the surface of the earth, and that includes the alges of the oceans and rivers.  The legend of osain tells that after olodumare created all the orisa’s and the nine heavens, the plants and earth. he observed that something sprouted out from the ground and a vine emerged that continued to grow and explan. with this new growth other greens plants began to also continue in growth, trees, plants vines, you name it. Olodumare looked and realized that

in his ever creation, in his true grandness, he subconsciously can create into perfection, never leaving out any detail that is not perfect.  Olodumare allowed this evolution, this enigma that really came forth from his creative mind, the vine uncoiled and formed a child like being, olodumare blessed him and continued on his way.  Osain developed and learned of the powers of that which he came from, learned the mixtures of this  plant with elements and all sorts of concoctions, and that he made’ making osain a master alchemist. We know that when the orisa’s and osha arrived from heaven they found great virgin forest and wilderness to travel about. This is learned in the odu of ogunda meji (3-3) in this same odu, we learn that humanity was instructed to eat of the foliage,fruits,berries,and barks to sustain their lives. Humans learning the ability of farming. Ogunda meji is the symbol of the successful transplant from heaven to earth.


Osains act of greed and restrictions on his herbs and their curative properties, began a struggle between the orisas and himself, to the point that the lord of thunder Shango disfigures him, leaving him with one eye, one ear,one arm, one leg. I believe that osain is a bit misunderstood’ in his role in our community with the idea that osain and shango remained enemies.  Osain later is healed by no other than Shango, beginning a friendship between the two, Osain gives shango a gourd that contains the same herbs used to cure him.  Osain’s gift  then gave Shango the ability of Fire using the herbs inside this gourd in obtaining the secret of fire.


Osain may not posses the title of all powerful and is left as orula’s servant because of his ego and wishing to surcome orula in battles.  Battles with the weider of the most powerful force Odu! what is ODU ? is the ultimate knowledge of all things to come, and those that have past.


Osain is many forms, he is the branch,plant,algae, mushrooms, forest, leaf, the shade of a tree.  Osain is found wherever there is wild forest, with birds and reptiles. his favorite spot is in trees that birds congregate.  Osain is a spiritual force which resides in groves of trees, there are few that can say I have seen him, yet he is all around. in times of past osain has shown his face.

In africa there are the legends of children or young adults that become trapped in the forests and emerge years later, with the tale that osain and his servants abducted them and trained them in the arts of the forest. Once this individual mastered the skills he was then allow to set forth into the world of mankind.

The sacred Omerio used to heal us, and consecrate our tools used in Orisa, the secret objects in the tureens, is Osain in true form, a combination of many medicinal plants,blood,grains,different waters,and of course a hot coal.  Through the process of this act' of an individuals conjuring" all of this is infused with osain or what he really is a spirit” that is combined to create and sanctify the secret tools and objects of Orisa and osha.  Without this magic there could not be one crowning of any of the children of Orisa. Why his role is less than his abilities, it was his dishonor when losing the war against Orula.


When we in the coven create our talismans and amulets, its with and only with the power of osain first. Using his spirit we infuse the objects that will become wards for whatever the cause. These charms are indicated to us from our guardians via divination or under the console of Orula to protect us or its user.


I hope you enjoyed reading this article and there are many more to come.